Five NOAA scientists recently led a group of more than 40 trustees in a multi-day restoration planning exercise related to the Hanford Nuclear Site. The event took place in Richland, Washington, and increased scientific convergence about habitat recovery time after restoration actions are completed in an affected area.

The U.S. Department of Justice announced a $4 million settlement that will fund some of NOAA’s restoration of sites damaged by industrial pollution in Port Gardner Bay and the Snohomish River in Washington state.

Recently NOAA and our partners announced a restoration project that will improve the floodplain of the White River in Washington State for migrating fish. 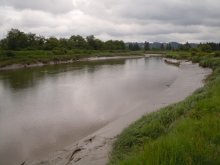 The Duwamish River was once a wide, meandering river with large areas of mudflats and marshes. By the 1940s, channelization and filling had transformed the 9-mile estuary into a 5-mile industrial waterway. This process destroyed 97 percent of the original habitat. 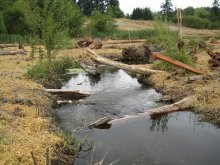 In the early 1900s, industrialization in Commencement Bay led to the filling of a vast area of tideflats, as well of channelization of the meandering streams and rivers that flowed into the bay. Beginning in the 1920s, the resulting eight channelized waterways received releases of hazardous substances from various industries, including shipbuilding, oil refining, and chemical manufacturing plants.

On June 10, 1999, a rupture in the Olympic Pipeline discharged approximately 236,000 gallons of gasoline into a tributary of Whatcom Creek. Fumes from the gasoline ignited as it moved down Whatcom Creek, through a city park and residential neighborhoods. 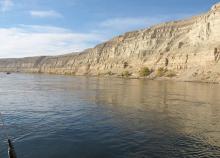 The Hanford Nuclear Site is located in eastern Washington State, and encompasses more than 500 square miles of land. For nearly 30 years, The U.S. Department of Defense and the Department of Energy produced tons of plutonium for use in the atomic weapon program.

Projects On Our Radar