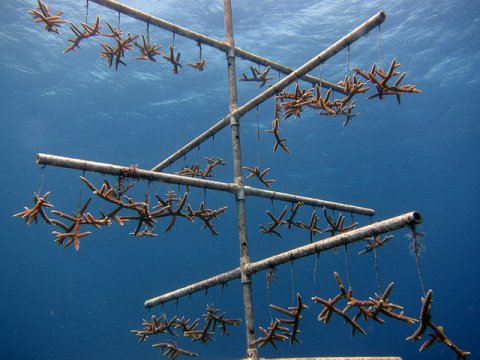 NOAA uses coral nurseries to help corals recover after traumatic events, such as a ship grounding.

anadromous species—Fish that spend most of their life in saltwater but migrate into freshwater to spawn.

benthic community/benthic organisms—Organisms that live in and on the bottom of the ocean floor.

CERCLA—The acronym for the Comprehensive Environmental Response, Compensation, and Liability Act of 1980, as amended by the Superfund Amendments and Reauthorization Act (SARA) in 1986, often referred to as Superfund. The federal statute establishes liability for site cleanup, prescribes a procedure for identifying and ranking contaminated sites, provides a funding mechanism for site cleanups, reduces uncontrolled releases of hazardous substances, establishes cleanup procedures that provide protection for humans and the environment, and restores injured natural resources through provisions administered by the natural resource trustees.

compensatory restoration projects—Projects to compensate for interim losses of natural resources and the services they provide—from the time of injury until recovery is completed.

consumption advisory— A federal, state, or local government recommendation to avoid eating a certain fish, shellfish, or other organism because it is unsafe due to high levels of contamination.

cooperative assessments—Assessments that are done cooperatively after an oil spill or hazardous substance release by trustees and the party responsible for the incident. This cooperation generally results in faster, more efficient restoration of injured natural resources.

DDT/dichloro-diphenyl-trichloroethane—A chemical compound commonly used as a pesticide until it was banned in the U.S. in 1972. However, DDT is still used in other parts of the world. DDT remains in the environment for many decades, accumulates in living creatures, and poses health hazards to humans, wildlife, and fish.

dioxins/furans—A group of highly toxic chemicals that are the byproduct of some industrial processes and incineration of plastics; they accumulate in living creatures and are known to cause cancer in humans.

FWS/U.S. Fish and Wildlife Service—An agency of the U.S. Department of the Interior with the mission to conserve, protect, and enhance fish, wildlife, and plants and their habitats for the continuing benefit of all people.

habitat—Place where an animal or plant normally lives, often characterized by a dominant plant form or physical characteristic.

HEA/habitat equivalency analysis—A method developed by NOAA for estimating how much restoration is needed to compensate for the loss of natural resources and their services from the time they are injured until they are returned to the condition they would have been in had the injury not occurred.

marine debris—Human-created waste that has deliberately or accidentally been released in a lake, sea, ocean, or waterway.

marsh—An emergent wetland seasonally flooded or usually wet and often dominated by one or a few plant species. Marshes can be either freshwater or saltwater.

National Marine Sanctuary Act—Legislation designed to identify, designate, and manage areas of the marine environment that are of special national significance due to their conservation, recreational, ecological, historical, scientific, educational, or aesthetic qualities.

natural resource trustees (trustees)—Government officials who act on behalf of the public when there is injury to, destruction of, loss of, or threat to natural resources as a result of a release of a hazardous substance or a discharge of oil. Trustees include the U.S. Departments of Commerce, Interior, Defense, Agriculture, and Energy; state agencies; and Native American tribes. NOAA is the lead federal trustee for coastal and marine resources.

NOAA/National Oceanic and Atmospheric Administration—A U.S. Department of Commerce agency whose mission is to describe and predict changes in the earth's environment and to conserve and manage the nation's coastal and marine resources to ensure sustainable economic opportunities.

nutrient cycling—The continuous cycling through an ecosystem of minerals, compounds, or elements that promote biological growth or development.

PAHs/polycyclic aromatic hydrocarbons—A group of organic contaminants that are often the byproducts of petroleum processing or combustion. Many are toxic to aquatic life and several are suspected of causing cancer in humans.

PCBs/polychlorinated biphenyls—A class of chemicals previously used in manufacturing that remain in the environment for many decades, accumulate in living creatures, and pose health hazards to humans, wildlife, and fish.

preliminary assessment—The first step in a natural resource damage assessment, in which trustees determine whether injury to public trust resources has occurred or is likely to occur.

primary restoration projects—Projects to restore natural resources injured by oil or hazardous substance releases to the condition that would have existed if the incident had not occurred.

RAP/Rapid Assessment Program—A capability developed and supported by the Damage Assessment, Remediation, and Restoration Program to collect perishable data and readily available information to determine the need for a natural resource damage assessment.

restoration—The goal of a natural resource damage assessment, which involves rehabilitating, replacing, or acquiring the equivalent of injured natural resources and the services they provided. Restoration includes both primary and compensatory restoration projects.

sediments—Loose particles of sand, clay, silt, and other substances that settle at the bottom of a water body. They come from eroding soil and from decomposing plants and animals. Wind, water, and ice often carry these particles great distances. Many sediments in rivers, lakes, and oceans are contaminated by pollutants, such as DDT and PCBs.

settlement—An agreement between natural resource trustees and responsible parties that specifies the terms under which liability is resolved.

slag—stony wate matter separated from metals during the smelting or refining of ore.

SVOCs/semi-volatile organic compounds—A group of hazardous chemicals that accumulate in sediments and living creatures; PCBs, dioxins, and some pesticides are SVOCs.

TCDD—2,3,7,8-tetrachlorodibenzo-p-dioxin; a toxic chemical that can be unintentionally released during the manufacture of certain chemicals. TCDD accumulates in living creatures, causes deformities in animals, and is classified as a probable cause of cancer in humans.

TCE—trichloroethylene; an industrial solvent associated with cancer in both humans and wildlife.

U.S. Coast Guard—A federal agency that responds to oil and hazardous substance releases and cleans up or contains the release in an effort to protect public health and the environment.

user-days—One person's use of a recreational resource (e.g., beach, park, etc.) for any portion of a day. User-days are sometimes used to help quantify lost recreational services due to natural resource injuries.

VOCs/volatile organic compounds—A group of chemicals that evaporate or vaporize readily and are harmful to human health and the environment.

wetlands—Transitional areas between uplands and water that are subject to periodic flooding or prolonged saturation and contain specific plant communities and soil types. Wetlands can be classified as either tidal (within the reach of the tides) or nontidal. Both serve important ecological functions.